Before I forget, I’m going to write down some basic information about van life in Morocco.

We took a ferry from Spain to Morocco, and stayed in Morocco for 6 months with an extended visa.

The very basic information about Morocco is as follows.

By the way, English is not widely spoken. (except in big cities).
French is the second language spoken.

In this article, Moroccan driving rules, roads, traffic and camping rules in Morocco from a van life perspective.

And since Morocco has a time limit for the car to stay in the country.

The following is a note of caution and danger information. 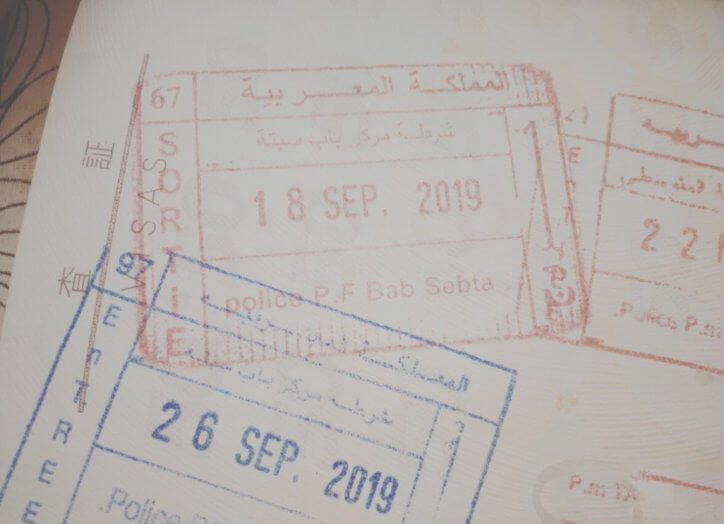 If you’re entering the country from Spain, there is passport control on the ferry, and the car is checked after we get off the ferry.

Arriving in Morocco by car

The required documents for the car are as follows.

When you get off the ferry, your vehicle will go through immigration in turn.

Prepare the above documents.

The inspector will check your car thoroughly.

Don’t forget to check, in advance.
If there are restrictions on what you can bring into the country, such as alcohol and tobacco.

【Caution】 ”Visa” for car in Morocco??

When you finish your car’s immigration check, you will be given a small white piece of paper with your documents back.

(It’s a palm-sized piece of paper with something like a QR code on it.)

It’s very important paper, you have to use again when leaving the country.

Please keep it in a safe place.

After entering the country, when the (car) immigration is over and you’ re going through the last gate.

You need to show this paper before the last gate., so it is best to keep it on hand until then.

By the way, the car can stay in Morocco for about six months of the year.

After that, you can’t enter the country again until one year has passed from the time of your arrival.

(We learned of this fact when we left the country.
I’m not sure if we understood correctly as they don’t speak much English.

I suggest you look for official information.

On a small piece of paper (gonna call it “car visa” from now),

there is a time limit on how long you can stay.

By the way, we didn’t know that we had a car visa.

so we were fined when we left the country for overstaying one day.

We didn’t know at that time that the car can only stay in Morocco half a year.

After spending about a week in Ceuta, we re-entered the country.

We had no problem getting back into the country, but the car couldn’t re-enter Morocco because car visa had expired…

That was sooo sad！

Especially since no one tell you when it’s time to leave, so be careful! 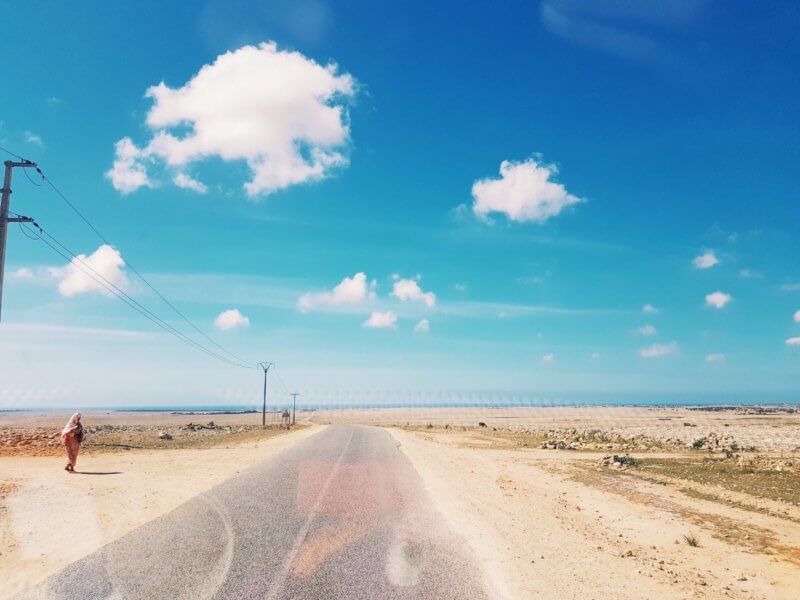 Many highways in Morocco are toll roads.

The roads are good and easy to drive.

The price is divided according to the size of the car, and the impression is a little expensive.

You have to pay the fee when you get a ticket or  when you go through the gate.

Depending on the section, there may be an attendant, or you may have to pay the fare in advance.

I don’t know why, but it seems to be banned in the country.

So I used an app called “Waze” for navigation.

I recommend this app because it informs you where the police are, the place under construction, and when you drive too fast than the legal speed.

(I heard a rumor that ”the function to inform you where the police are is illegal in some countries”.
So if you’re unsure, I recommend you look into the rules in each country).

Can’t thrust this app but better than nothing.

If arriving late at night, i suggest staying near ferry terminal, and go buy prepaid sim card next morning.

Petrol / Diesel are much cheaper than in Europe.

So if you’re coming from Europe by car, it’s more economical to fill up your tank in Morocco.

Basically, you can find gas stations everywhere, so you’ll be fine.

Even in small towns, there are places where you can fill up.

As I mentioned earlier, most highways are in good condition and easy to drive.

The national highway is relatively easy to drive on, but beware smaller roads can be in terrible condition.

There can be big holes in the road and very bumpy.

Also be careful driving at night, its very dark and people seems to don’t care much about safety.

Animals on the road!

Horses and donkeys are still being used for transport on the road, so you need to be careful when you come across them.

Go around at low speeds 😉

Also, be careful because you may encounter goats and sheep that are running free on the roads.

That said, there’s nothing particularly dangerous about it.
If you drive with caution, you should be fine.

And you can’t miss the famous Moroccan goat trees!
(See photo below.) 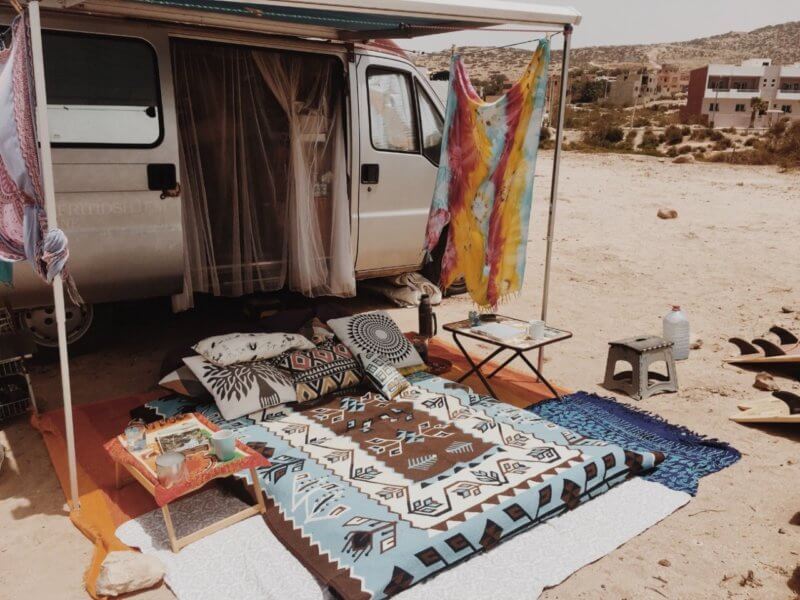 Next up is the camping situation.

For campsites and places to spend the night.
We always looking for places on the app ”Park4Night”.

The app is made up of users filling in reviews along with photos, so I recommend it for a reviews and other camping information!

Campsites are cheap and start at about 50 MDH.

It depends on the campsite, most of them include shower and electricity.
But sometimes they charge extra for that.

Most campsites have hot showers, but to be honest, the quality of the showers is not great…

The latest European style campsites had a higher percentage of OK showers.

Depends on the campsite!

But sometimes necessary to notify the police in advance if you want to wild camp.

However, we met a lot of campers on the trip.

It seems that they are wild camping without filing a report.

There are some dump stations here and there.

Check out Park 4 Night for the locations!

We didn’t wild camp in Morocco.

We always stayed at campsites because it was cheap and we can sleep safely. 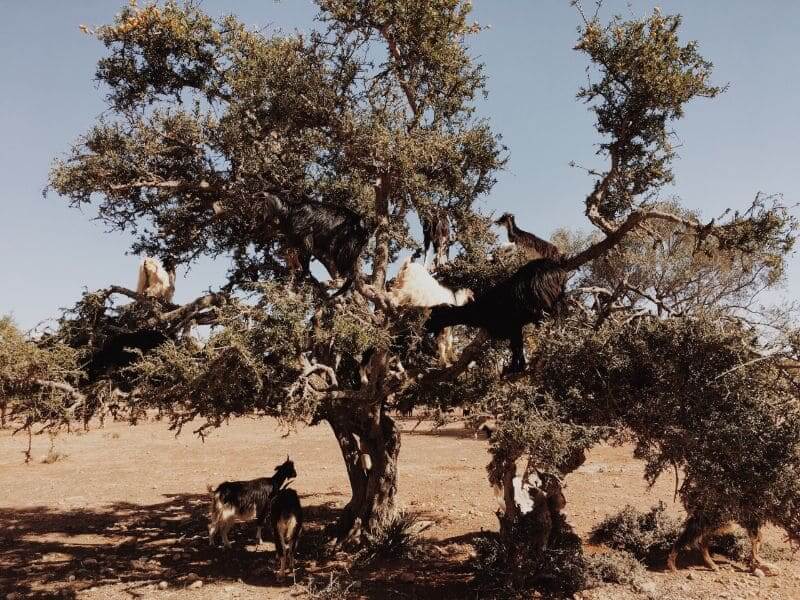 The number of tourists seems to have decreased significantly.
Because some tourists were killed.

Since then, the police have tightened their protection system for foreign tourists.

Tourism revenue in Morocco is an important source of income.

“We hope that people will come back to Morocco as soon as possible to get rid of the dangerous atmosphere.”

This is why the police are strengthening their protection system for tourists.

I heard from the local people.

Local cars were often stopped and checked by the police while driving on the road.
But foreigners like us were able to pass without being stopped.

The police were all very kind!

We didn’t run into any danger in Morocco, but many local sweet guys told us…

So better remember that.

You need to be especially careful about people who talk to you in a to familiar way.

If you pay attention to the above, you can usually get away from such peoples.

It’s best not to take advantage of them.

At one campsite, military police with guns.

There were places where they kept watch all night long.

I felt a sense of security that I was being protected, but I thought, ‘It’s so dangerous⁈

I was quite anxious….

We had just entered Morocco.

The more we went to the countryside, the more friendly and helpful everyone seemed to be.

Of course, there are a lot of nice people in the city as well!

I don’t recommend wild camping in big cities, even not only in Morocco.

If there are that many people, it means there are more chances of bad people in the city.

Avoid risks and protect yourself!

Staying in a campsite will ensure your safety.

Parking in the city is also a risk of being stolen, so it’s best to park in a parking lot with security guards, especially in the city.

It’s a good idea to tip the guard a little extra.

They pay particular attention to your car then. 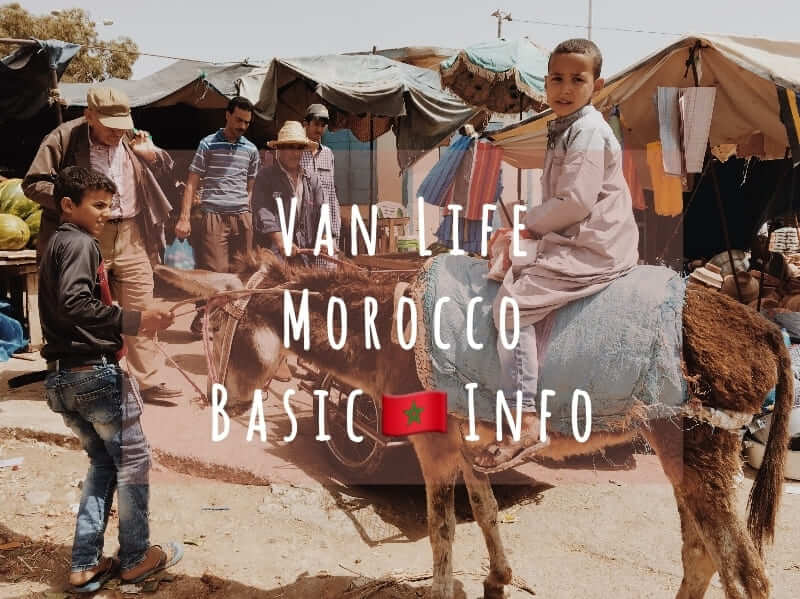 We stayed in Morocco for 6 months with an extended visa.

There are a lot of campers from Europe, especially in the north.

Everyone seems to be coming to Morocco to escape the cold European winter.

Morocco is a Muslim country so take some precautions and remember to respect the Muslim culture!

Thank you for reading to the end!

I am Citroën Jumper
DIY camper van.
We are full-time Van Lifer
since 2018.
"Sweet Home Betty"
is about
Van Life**Journey